Intense ruby red in color this wine offers up a nose redolent of cassis, cedar and sweet tobacco. In the mouth a framework of taut, yet elegant tannins give way to flavors of ripe dark cherry, espresso bean and just a hint of nutmeg.

While Maipo has a long-standing history of producing high quality Cabernet Sauvignon, it is only recently that the wine world has begun distinguishing between Maipo Centrale (the valley floor) and Alto Maipo (Upper Maipo). Alto Maipo literally runs up into the lap of the Andes Mountains. In topography, the higher you climb, the more rocky and stony the soil becomes and the less moisture retention there is for the vines. Consequently yields are lower and fruit is more complex. Additionally, there are other factors to consider here. Cold air rolling off the mountains at night provides great respite for the vines and their elevation means they are also cooled during the day by the Pacific Ocean breezes. So, despite enjoying longer sunlight hours, the cooling effects on these vines, results in a longer ripening period and thus hang time for the fruit, ultimately ensuring better balance and complexity. This is the flagship of the Casas del Bosque brand, and If ever you needed a compelling wine to go toe-to-toe with California’s elite Cabs…..this is sure to send a message! 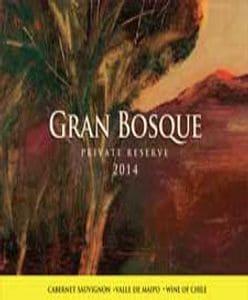 Following the completion of fermentation the wine was pressed off skins and put into a mixture of new (65%) and 2nd use (35%) French oak barrels where it was then aged for 22 months. During this time it was racked twice: once when it was first sulfured (following the completion of malolactic fermentation) and then once again shortly before bottling. The finished wine was then carefully bottle aged for three months, prior to release. It is a new release for us in the US and 150 cases of 6 were imported for this vintage.