The problem with being a cool climate specialist producer in Chile is that regardless of how great your Sauv Blancs, Chards and Pinots are, the global marketplace expects you to make Cab Sauv and Carmenere. Pressured by market economics these folks contracted vineyards in the great Maipo Valley and in particular, an 80+ year old dry grown vineyard on a mountain slope. One of the benefits of working in Chile is that they do not place a premium value on old vine fruit because there’s so much of it to go around. So here you have a single vineyard, with really old vines, producing a deliciously extracted and juicy Cab Sauv, at a mere fraction of the price you would pay for a comparable domestic alternative. It’s really not any more complicated than that. Domestic wineries ould have replanted this vineyard 3 times by now because the lower yields are not seen as commercially viable – but not in Chile. Here you get the full benefit of big, juicy, old vine fruit, without the sticker shock. The winemaker is a legend and the international media agree. An absolute steal! No surprise this brand is Vivino’s consumer favorite from Chile.
Also – this was Chile’s Winery of the Year (IWSC in London) in 2014 & again in 2015! 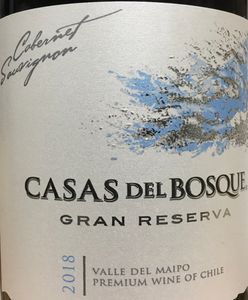 Attractive purity and fragrance with aromas of roses, violets, raspberries and red plums, all intertwined. The palate has a fresh, juicy feel with supple, lively tannins carrying a bright, fresh finish. Drink or hold.

Grown in the Maipo Valley the fruit was harvested in mid-May. Following harvest the grapes were destemmed and then crushed to tank at which point the must was warmed and inoculated with selected yeasts and fermented during 10 to 15 days with temperatures peaking at 32ºC/90ºF. During fermentation the vats were pumped-over three to four times daily in order to extract the ideal amount of tannin and colour. Following the completion of fermentation the must was subjected to an additional 5 days of post fermentation maceration (to give a total of 19 days total skin contact). Fermented on its skins for 3 months, it was then aged for 14 months in new and used French oak barrels during which time it was racked and returned three times. After bottling the finished wine was carefully aged for three months prior to release in order to increase complexity.