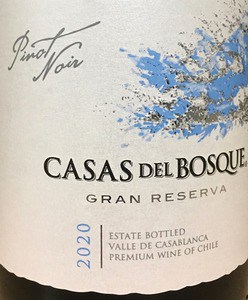 Vineyard located within the coolest, westernmost reaches of the Casablanca Valley. Grown on hillside blocks facing from north-east to north-west. Vineyards planted between 2000 and 2010, equipped with drip irrigation. Crop levels are an average of 5 tons per hectare (2.5 tons per acre). The ripening season was characterized by a warm and dry summer. Rainfalls were scarce, only 150 mm, mainly concentrated between May and September. Grapes were picked by the end of March.

The fruit is partially destemmed and cold soaked for 3-4 days. Spontaneous fermentation in open-topped tanks. During fermentation the vats were handplunged twice daily. Total cuvaison is two weeks at most. Malolactic fermentation was induced inoculating the wine with selected lactic bacteria. The young wine was drained to new (5%) and second use (25%), water-bent American barrels for 10 months. The remained wine aged in third-fourth use
French oak barrels and a German oak cask. The wine was then racked and kept in tank, clarified with inactivated yeasts during additional 8 months until ready for filtration and bottling. A total of 2.300 cases were made.

Sweetly fruited, with strawberries, raspberries and orange skin on the nose and hints of cinnamon and toasted coconut. Medium bodied, fresh and balanced, with good acidity and moderate tannins.