Aromas of lime, green apples and linden blossom, with a hint of jalapeño characteristic of Casablanca Sauvignon blanc. In the mouth, the wine is weighty, with yeasty notes and refreshing acidity. The finish is clean with lingering citrus and floral notes. 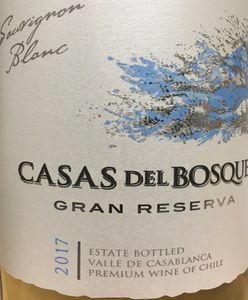 On arrival at the winery all grapes were first destemmed and crushed to stainless steel tanks (via a chiller in order to drop the temperature to between 0 and -2°C or 28-32ºF) where they were then left to cold soak for 5 days. Following this time the free-run juice was drained by gravity from the tanks. The remaining skins and juice were then dug out and gently squeezed using pneumatic presses. Press fractions were used separately. The resulting juices were left to cold settle (at 10ºC/50ºF) for 2 days following which time 70% of the blend was racked to mostly neutral French oak barrels. The barrels were first inoculated with Torulaspora delbrueckii (a native yeast isolated from the vineyard) and then, 3-4 days later when fermentation had already begun, they were inoculated a second time with Saccharomyces cerevisiae to ensure completion. Temperatures during the fermentation in barrel peaked at 18ºC (or 65ºF). The remaining 30% of the blend was racked to stainless steel tanks, inoculated with Saccharomyces cerevisiae and ultra-cool fermented, reaching temperatures as low as 10ºC/52ºF at the peak of the fermentation. After the completion of fermentation the wines were left on gross lees for three weeks (without stirring) before being blended, cold stabilized, filtered and bottled.