With South Africa having more planted acres of Chenin Blanc than the rest of the world combined, it stands to reason that some winemakers would want to make some cool renditions of the much maligned grape. Previously most of the Chenin in South Africa was used to make brandy, but with the drinking habits of millennials shifting more toward wine, some of the older, lower yielding vineyard sites are up for grabs, creating new ‘garagiste like’ opportunity for this grape. As a recent runner up in South Africa’s Winemaker of the Year awards, and the successful building and selling of well known Glen Carlou winery to Donald Hess, David Finlayson is not without some formidable talents, although for this creation, he chose to let the fruit speak for itself – literally. This is a combination of grapes from the second oldest Chenin Blanc vineyard in South Africa, planted in 1947, and another 55 year old unirrigated, bush vine vineyard. The older vineyard yields a mere 2 barrels of wine, while one more barrel is made from the younger vineyard. 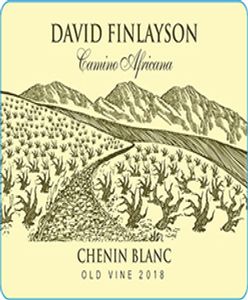 93 pts Tim Atkin  Bush vine parcels planted in 1947 and 1961 supply the fruit for this finely wrought Chenin Blanc from David Finlayson, who blocks malolactic fermentation to keep the wine tight, steely and focused. Balanced, elegant and refined, this a wine that will reward further time in bottle. 2020-28

Not a very densely planted vineyard and given that nobody cared about clonal ID back then, in 1947, no information is available on the clone. Typical of the era, this is a bush vine vineyard and given its deep root system, it is dryland farmed. The sum total of this old vineyard, produces enough fruit for 2 hogsheads and a small concrete egg. 2018 was the last year of the drought. A supplemental fruit source is used to boost volumes a little – from a 56 year old bush vine vineyard, close by. The beauty of old vines is that they have been there before, have deep root systems and hardly seem to be affected by the drought. The wine was made with the absolute minimum intervention and to allow the old vines to express the true flavors of the site and variety with as gentle a human touch as possible. Wild fermentation, left on lees for months, racked to a bottling tank and treated with a little Bentonite fining and very slight sulfur addition, pre-bottling. The wine has an unmistakable minerality and the salty, umami flavor on the palate that can only be found when vines have struggled for decades to make their mark in the soil.