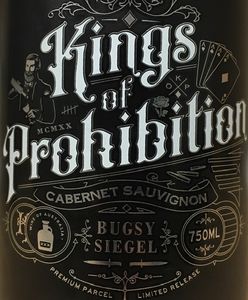 Named after Bugsy Siegel, a mobster who made history on the Las Vegas strip, ‘Kings of Prohibition’ Cabernet Sauvignon is an attractive fruitdriven red with a full bouquet of sweet berries and violets complemented by subtle French oak. The ripe berry character flows smoothly onto the palate, combining with spices, vanilla oak, and soft chewy tannins. This wine is a delicious match for roast lamb or aged cheddar cheese.