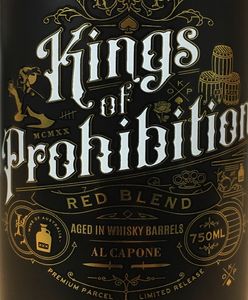 Celebrating the legendary Al Capone, ‘Kings of Prohibition’ Red Blend is a bright crimson red color with a dark purple core. Flavors of rich plum
and black fruit, hints of vanilla and chocolate, and underlying black pepper, cinnamon spice, and licorice. Enjoy with Wagyu steak and a side of crispy fries