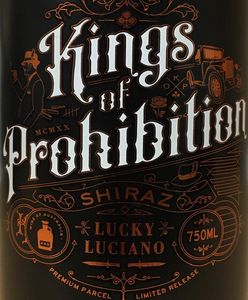 Lucky Luciano, a New York City bootlegger and gangster, appears on the ‘Kings of Prohibition’ Shiraz. From the Barossa Valley in Australia, it has
dark cherries and plum aromas that integrate with classy oak and a hint of spice. The palate is bold and rich with structured tannin balanced across a luscious finish. Pair it with grass fed rib-eye and mushrooms.