A deep mauve in color with a crimson hue. The nose is complex and earthy: rich leather, prunes, caramelized dates, coffee, black currant, meaty, wine gums and some toasty brown spice. These aromas are supported on the palate by red berries, plums and chocolate. The ripe fruits and chocolate mingle on the creamy palate. Saucy, savory characters add to the complexity with balanced tannins and sweetness to help round off the finish.

Winery: Paringa
Region: Australia, Riverland/South Australia
Varietal: Shiraz
SKU: PARSPASHI2018 Categories: Red, Shiraz, Other, Sparkling
Bottle Size: 750 ml
Food Accompaniments: Best served icy cold in a flute glass. This versatile wine can be enjoyed as an aperitif or with a wide variety of dishes like: bacon and eggs for breakfast; turkey with cranberry sauce at lunch; a medium spiced curry for dinner. Then a chocolate fondue or a cheese platter for desert. Ideal serving temperature 8C to 10C. 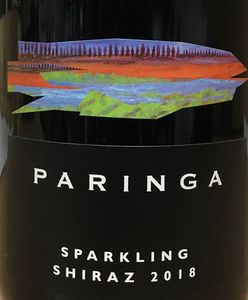 The grapes come from 15-year-old vines grown in a sub-surface limestone layer beneath sandy loam topsoil. Paringa Sparkling Shiraz gets its “fizz” (carbonation) not from secondary fermentation but from the process of dissolving carbon dioxide in a liquid. The process involved carbon dioxide under high pressure. When reduced, the carbon dioxide is released from the solution as small bubbles, which cause the liquid to become effervescent. The CO2 gas is exogenous. It is continuously added to the wine stream, which has already been stabilized and chilled to -2°C. The CO2 comes from a reserve tank, which holds the gas at high pressure and only “food grade” CO2 is used.