Rieslingfreak was established in 2009. John Hughes grew up on a family vineyard in the Clare Valley, South Australia, and has been driven by the versatility of the Riesling grape. His passion for Riesling was noted in his university days, where he always had a bottle or two of Riesling to share, and soon became known as the “Riesling Freak”. Rieslingfreak No. 33 incorporates both his growers in the Clare Valley – Richard & Anne Hughes (John’s Parents) and Robert and Lyn Jaeschke from Polish Hill River. In 2020, it ends up being 76% Hughes family from White Hutt and 24% Jaeschke family from Polish Hill River. While wines from Clare Valley can be a little leaner and more austere, John worked hard to make this wine more supple in the mid palate and more immediately enjoyable – both with and without food. This is a limited production of only 876 dozen.

The heavy red soils in the vineyard contributing to the fruit generosity seen in this wine. The Polish Hill River portion in the wine, provides the wine with an acid profile and drive. The wine is made in a generous and refreshing fruit driven style with a soft, velvety palate of exceptional length. It has classic flavors of ripe lemon and lime and some tropical fruit notes. It drinks well young, but will also reward with cellaring 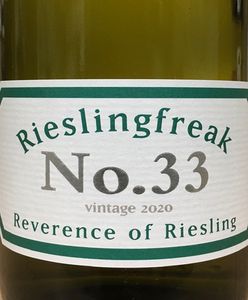 The Polish Hill River vineyard is planted on grey brown loam, over sandy limestone and shale rock at 460m above sea level. The average rainfall is 625mm. The White Hutt vineyard is situated on the flats, in the middle of a valley, and has its own very unique microclimate. This vineyard is planted on heavy loam and red terra rossa soil, with limestone subsoil. It is situated 500m above sea level, with an average rainfall of 550mm. 2020 was the driest year on record. Right up until the end of December, we had high temperatures, in the 40’s. Just hot and dry! In January, temps cooled down considerably until harvest. Water was scarce – there was no rain for months – until Jan 31 when they had over 60mm in a day, setting up the grapes nicely for harvest. Crop levels were way down, but the cool change in weather allowed the grapes to ripen slowly, holding great natural acidity, right up to harvest. The harvest decisions for the 2020 vintage were complicated. Summer was hot, all through December, followed by a very cool January. This was perfect for the ripening of the grapes, in terms of sugar accumulation, while maintaining higher acid levels in the fruit. Grapes were machine harvested at night and fruit was in the winery by morning – the preferred method for Riesling. Instead of pressing his Riesling, John uses a spin and drain method, where they spin the press every 10 minutes, to extract the free run juice – this ensures that the berries are treated very softly, whilst maintaining the purity of the juice. The juice then settled for about 5 days. Once the juice was clear, and solids were settled at the bottom of the tank, the wine was racked and the juice was ready for fermentation. The wine was then fermented at around 55 degrees for 10-12 days, until it reached his desired sugar level, at which point the wine was chilled and sulfured, to stop the ferment. The Riesling was then hot and cold stabilized, to remove all haze and crystals, before being filtered and bottled. Time lapse from harvest to bottling
is roughly 3 months. Wine was released soon thereafter, in June.