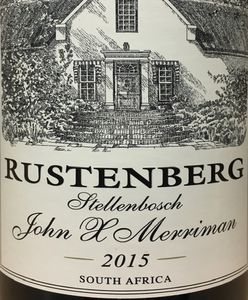 This wine is named after a former owner of Rustenberg, John Xavier Merriman, who bought the farm in 1892 in sympathy with farmers suffering from the phylloxera crisis. He played a great role in revitalizing Rustenberg and in promoting the tourism and agricultural value of Ida’s Valley, the area close to the town of Stellenbosch in which Rustenberg is situated. The John X Merriman is Rustenberg’s Estate wine, a blend of Bordeaux varietals that illustrate the ageability and true expression of Rustenberg’s finest vineyards. We recommend decanting this wine before serving.

The cold wet Winter of 2014 started early and ended late, which is ideal for the vineyards’ dormancy; however an unseasonably cool Spring resulted in the vines going into Summer with 10 to 40% less crop than usual. The remainder of the season was warm and dry resulting in one of the earliest harvests on record. Zero disease pressure and small crops of fantastic ripe fruit combined with high natural acids make this potentially the vintage of the decade.

The John X Merriman is a powerful wine that rewards aging. In its youth the wine is worth decanting and expresses cassis, black currant and dark fruits complemented with cigar tobacco and sour cherry notes. As the wine ages and its fine grained tannins soften a softer more savoury palate develops revealing wonderful drinkability and tertiary complexity.