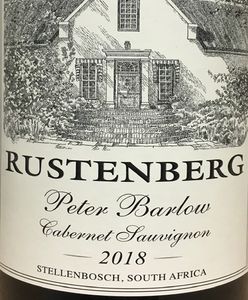 An impressive follow up to the brilliant 2017, this pure Simonsberg Cabernet Sauvignon is enjoying a rich run of form. Inky, concentrated and profound, with cedarwood and graphite aromas, impressive structure, fine-grained tannins and fleshy plum and dark berry fruit.

The name of this wine pays tribute to the man who recognized the potential of Rustenberg, and bought the farm in 1941, reuniting the property, restoring its buildings and investing in its potential to make world class wines. The oldest Cabernet Sauvignon vineyard on the estate is named the Peter Barlow block and consistently produces powerful, long-lived Cabernet Sauvignon that is given the best possible treatment in the cellar. Peter’s family now continues his legacy. We recommend decanting this wine before serving.

This vintage was impacted by the fourth year of the ongoing drought in the region. The 2017 Winter was cold and dry, followed by a dry Spring and Summer, with bouts of unusual weather. A number of thunder storms resulted in a late onset of additional vigour in the vineyards. Unsettled weather and wind during flowering, along with a freak hail storm and low levels of soil moisture decreased yields by 20% to 50%. The harvest began closer to its average start date and the smaller berries and bunches yielded lower juice volumes per ton. The lower yields resulted in the
wines showing excellent concentration and body, producing rich, robust reds and fruit forward, expressive whites and rosé.

Concentrated cassis, black cherries and some herbaceousness on the nose and palate.