Menu
No products in the cart.
$0.00 Cart
Search

Bruno Tait was one of the first producers we ever worked with in Australia. He was already a favorite of The Wine Advocate and made predictably big, full throttle Barrosa style reds. Back then in 2000, Bruno Tait made roughly 400 cases of wine a year and both he and his wife Michelle, had day jobs. This Basket Pressed Shiraz comes off his tiny home block, and yields around 250 cases. The vines are pushing 50 years of age and are Bruno’s pride and joy. Albeit that alcohols run pretty high in the Barossa, balance is always Bruno’s priority, as can be seen with this wine. The little town of Lyndoch in the southeastern corner of the Barossa Valley is somewhat cooler and grapes have better acid retention, leading to better balanced wines. 100% of this wine was hand picked and open tank fermented. 100% of it was basket pressed. The wine only sees 20% new (French & American) oak and spends about 15 months in barrel. It is unfiltered and unfined. 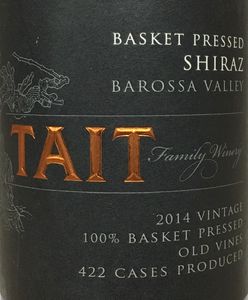 The 2014 Shiraz Basket Pressed comes from a different Rowland Flat vineyard from the one that went into this bottling through 2010, with younger vines planted on unirrigated sandy soils. The style remains the same, with big, bold fruit backed by soft oak shadings and ample richness. It’s full-bodied and velvety on the palate, with a long, fruit-driven finish.cassis and mocha, plus wafts of licorice and cloves. Very big, rich, full-bodied and opulent in the mouth, the oak really needs time to integrate, yet the firm, ripe structure and concentration suggestion this is built for the long-haul.

Given that the American market for Aussie wines yields more easily to wines like Bruno’s famous Ball Buster red blend, which sells for under $20/btl, than it does to big, show- stopper Shiraz’s like this, we don’t see very much of it – roughly 60 cases a year make it into the country. Still, it is hard to think of a more accomplished producer in the Barossa Valley and as such, at $50 retail, this has been a really consistent performer at the higher end of this category….for nearly 15 years.

This fruit comes from low yielding vines on Bruno’s property. Fruit is fermented in open tanks and punched down for roughly 2 weeks, 4 times a day. It is then basket pressed and settled in barrels for approximately 18 months, before being bottled unfiltered and unfined.