A Sense of Place is something that many winemakers talk about but it’s a tricky concept to get across to anyone who has not visited the region or who knows the people involved. In many ways, the “new world” Sense of Place echoes the old world notion of Terroir where the effects of soil, site, aspect, climate and tradition
all come to bear on the eventual character and quality of the wine – lending it a unique personality. On a beautiful hillside in the Clarendon sub-region of McLaren Vale, three generations of the Smart family have devoted their lives to Grenache. Decades have passed where precious few valued their crop and yet they endured. That this remarkable vineyard has survived, is all due to Bernard Smart, and this wine pays homage to this charming man.

From a near perfect vintage for the site, this wine displays muscular yet elegant silky black fruits couple with deep, rich, warming spices, hints of violet, mineral and black cherry. Depth, persistence, focus – it’s all here, in spades! 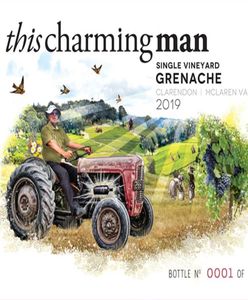 Right across South Australia, the 2019 vintage will be remembered as a very challenging one. Very dry conditions persisted throughout the growing season while some areas also had to contend with frost, hail and wind – all of which reduced the crop but helped increase concentration and quality.

This remarkable site has vines that are 100+ years old. The entire site, high in the picturesque Clarendon sub-region of McLaren Vale, is planted entirely with dry grown bush vines and has been farmed by the same family for 3 generations. This wine is sourced from one particular block where the canopy is raised slightly higher above the ground, allowing for better air circulation and increased radiated sunlight. Hand picked on March 10th and transported to the winery, where 20% was retained as whole bunches to be placed on the base of a 2 ton open fermenter. The fruit underwent a wild fermented and was gently hand plunged twice a day during that time. After that, the wine was pressed off, into 300 liter hogsheads, of which 25% were new French oak. A year later, the wine was racked from there to bottle – unfiltered and unfined.