It is a deep crimson wine, with aromas of fresh fruit and taste of licorices, damson plum, violets, raspberries and touches of vanilla, raisins and spices. 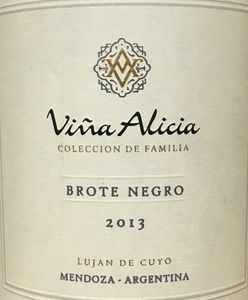 The Arizu family have been grape growers and viticultural pioneers in Argentina for 5 generations. Think of them as the ‘Mondavis of Mendoza.’ They own the oldest producing Malbec vineyard in Mendoza –planted over 150 years ago – the Las Compuertas vineyard. About 15 years ago, random plants in this vineyard underwent a spontaneous transformation and came out of the dormant season as a new species of DNA seen nowhere else on earth. DNA analysis confirmed the uniqueness of the rogue, mutant vines which other than being different, were perfectly healthy. Each year since then, more random vines throughout the vineyard have made the transformation – just less than 1% of the total vineyard has transformed. The remaining 99% of the Las Compuertas vineyard is managed and harvested in 2 main sections. One part for Las Compuertas Malbec and the other for Paso de Piedra Malbec. The rogue vines are kept separate and used to create roughly 150cs of a wine called Brote Negro – The Black Shoots. Matt Kramer (Wine Spectator Magazine) called this “the benchmark for Argentina”. This is a tiny piece of wine history – drinking it is a rare privilege.