Harvest – This is manually performed, using 12 to 14 kilo plastic cages, to ward against berry damage and protect from contamination. At this stage, two bunch selections have been practiced: the first after flowering and the second when the fruit colored, to discard misshapen, imperfect or insufficiently colored bunches. Only the better exposed, fully ripe and sun kissed berries are harvested. Winery Arrival – Upon arrival at the winery, the third selection of fruit bunches is carried out manually over special tables to separate immature grapes, dry or withered, before proceeding to remove stems. This operation is performed by a machine placed across the opening of the fermentation vessel. Winery Method – A cold maceration is allowed for two days before the onset of fermentation. Only then does alcoholic fermentation begin, thanks to the region’s natural yeasts that bestow terroir character. An extensive maceration follows to enable thorough tannin and polyphenol extraction, crucial for wine longevity. During fermentation 2 to 3 daily mixings are made, with squeezing, to favor transference of these elements to the wine. All these operations are done in a very careful, gentle way. Wood regimen – once alcoholic fermentation ends, the wine is set in new French oak barrels for malolactic
fermentation. When this stage concludes, casks are cleaned and wine is kept in the same ones for 12 more months. Bottling – The wine is kept 60 days in a “cold chamber” at very low temperature for stabilization. Then is bottled without filtering, and remains at less 12 months in bottle before being released
to the market. 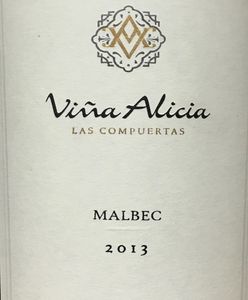 The Arizu family have been grape growers and viticultural pioneers in Argentina for 5 generations. Think of them as the ‘Mondavis of Mendoza.’ They own the oldest producing Malbec vineyard in Mendoza –planted over 150 years ago – the Las Compuertas vineyard. About 15 years ago, random plants in this vineyard underwent a spontaneous transformation and came out of the dormant season as a new species of DNA seen nowhere else on earth. DNA analysis confirmed the uniqueness of the rogue, mutant vines which other than being different, were perfectly healthy. Each year since then, more random vines throughout the vineyard have made the transformation – just less than 1% of the total vineyard has transformed. The remaining 99% of the Las Compuertas vineyard is managed and harvested in 2 main sections. One part for this wine – the Las Compuertas Malbec and the other for their entry level, Paso de Piedra Malbec. The rogue vines are kept separate and used to create roughly 150cs of a wine called Brote Negro – The Black Shoots. The vast majority of the production is Paso de Piedra, while roughly 1200 cases of this particular wine are made. Drinking these wines is partaking in a tiny piece of wine history.