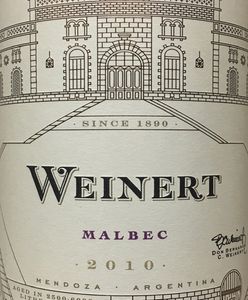 The vineyards for the Weinert Malbec are situated in Lujan de
Cuyo, more specifically in the sub-regions of Perdriel, Lunlunta
and Agrelo. The grapes come from 4 small, family-run vineyards
with vine ages of 30–90 years. Finca Motta is run by Jose Motta
and is a 35ha vineyard in Agrelo, planted on deep sandy rocky
soils, at an elevation of 950m (3,117 ft) above sea level. Finca
Cannatella is run by Jeronimo on a 6ha vineyard in Perdriel.
It has loamy soils with gravel and clay, and is situated 940m
(3,090 ft). Finca Dos Puentes and Finca Pollini are run by the
Vicente Family in Lunlunta. These vines are planted on sandy
mineral-rich clay soils, and are 940m (3,090 ft) above sea level.
2010 vintage was a low yield but a very high quality one.
Low yields were due to a cold spring that delayed bud
break, which was followed by scattered frosts which led
to uneven flowering. January and February (beginning of
summer) were quite warm and no rain or hail storms after
mid-February led to perfectly ripe, healthy grapes with
great concentration.
All grapes were harvested manually over the first two
weeks of April, 2010, and selected at the vineyard . Then
they were transported in small 20kg cases to the winery
and immediately crushed. The grapes were fermented in
epoxi painted cement vats for 7-10 days in temperatures
between 78.8°–82.4°F, pumping over twice a day. Complete
malolactic fermentation. The wine was aged in French oak
casks of 2,200–6,000 liters.